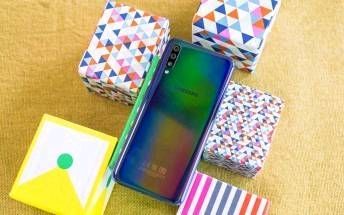 Samsung has been moving faster with software updates for its devices for Android 10, and the change of pace is refreshing to see compared to how slowly it rolled out previous new Android iterations.

The Galaxy A30 and A50s from last year have already been tasting that Android 10 sweetness, and today the Galaxy A70 is joining them. Samsung has started the rollout of Android 10 for this device in Ukraine. As usual, expect more and more countries to see it in the coming days and weeks.

The update arrives over-the-air as a 2.06GB download, and once you have installed it you'll be running Android 10 with Samsung's own One UI 2.0 on top, as well as the February 2020 security patch level. That's current at the moment, so props to Samsung for not issuing outdated security updates like other companies.

According to a roadmap shared by Samsung earlier, this release was supposed to go out to the A70 in April, so it's great to see the company beat that by more than a month. Of course it may be that the rollout will actually make its way to all countries by April, but this is a good start nevertheless.