New leaked images and video purportedly show the Samsung Galaxy A82, but unlike its predecessor and contrary to rumors, there’s no innovative camera setup – simply a set of static, rear-facing shooters. 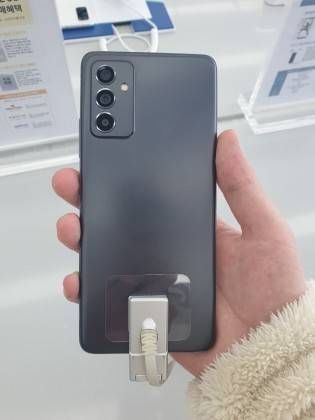 In that sense, the Samsung A82 may end up resembling what we expect the Samsung Galaxy S21 FE will look like with its triple-rear cameras in a vertical line.

We got our first looks at the Samsung Galaxy A82 thanks to a series of new leaks, first in an unboxing video posted by SamMobile showing a phone called the Samsung Galaxy A Quantum 2 – a successor to the variant of the Galaxy A71, the Samsung Quantum, that launched in some regions last May.

From the video, the Quantum 2 looks designed similarly to the Samsung A52 and Samsung A72 announced in March, with the same raised camera block but even fewer lenses on the back – a trio, like the Samsung S21. This model comes in a white color and looks to have a slightly curved waterfall screen, volume rocker button and lock button the right, and USB-C port on the bottom (though no 3.5mm headphone jack). Reportedly, the A82’s box contained a 15W fast charger and cable.