Scoped storage on Android 11 is ruining the Google Photos experience

If your go-to gallery app is Photos, deleting anything from your Android 11 device will be a bother and there's little you can do about it 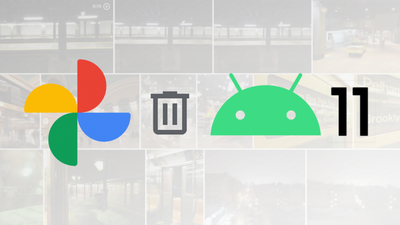 If you plan on buying a phone with Android 11 soon, you'll want to get used to your manufacturer's gallery app. And if you're going to be using Google Photos on something that's not a Pixel, be prepared to confirm every single thing you want to delete on the app. The reason why boils down to a new, well-intentioned policy in the operating system that leaves end users with some annoying consequences.

Here's what it looks like to delete pictures and movies on Google Photos for most users right now.

You hit the trashcan icon, see a toast prompt at the bottom of the screen, tap "Move to trash" to confirm, and the media goes into the app's trash where it will sit for 60 days before it clears completely off your device. You can also hop into the Library tab and look in the Trash folder to manually wipe those pics. This experience is pretty consistent across different devices.

Now let's take a look at what you'll see on that new, non-Pixel phone of yours on Android 11 as illustrated by our Artem Russakovskii on his OnePlus 8T.

On your new device, you'll see the toast prompt, but then this new dialog box on the left featuring the content you want to trash along with options to allow or deny Photos the privilege of moving said content to said trash.

But it's not just that: if you use the app on a second device — maybe a tablet or your desktop machine — and want to trash something that was taken on your new phone, when you pick up that new phone again and hop into Photos, you'll be alerted to "out-of-sync changes" and will be required to give permission for the app to move the items to the trash.

The short answer is "scoped storage," or the MediaStorage API to be more specific. If you don't know what that means, don't worry, that's what the long answer is for.

Scoped storage that was originally meant to come into play on Android 10, but was delayed after backlash from app developers. In short, this policy would create a new permissions structure for apps to access different levels of your system storage stemming from an app's dedicated directory and going all the way to full storage access. This way, apps don't scan every file on your disk by default as was the case before Android 11 and users' privacy would benefit. The way Android sets out on this policy is by giving its existing MediaStorage API some new tools to work with and rules to enforce, like putting up permission prompts when an app wants to move a file from one place to another on the disk and setting up a system trash bin that keeps files around for 30 days for potential recovery before deleting them.

Some system apps, however, aren't subject to those rules. Namely, any given Android device has a set of default apps for, say, a launcher or for messaging, and they have the ability to execute privileged tasks such as writing data on the disk as a background operation. Users have the option to change them in their system settings and they behave with that elevated status.

With Android 11 came a new default slot for gallery apps. But a source at Google we've spoken with tells us that this slot is not user-selectable and is locked by the OEMs almost always to their own gallery app. Galleries aren't a default app category you'll see in your settings and even if you disable the OEM gallery app, it will still be regarded by the system as its default. That means if you have a OnePlus phone, only the OnePlus Gallery app can move files to the trash without explicitly prompting you to allow or deny it.

And thus, there's the trouble with Google Photos. Except on Pixels and other phones where it is the default gallery app, the company is subjecting its integral, ubiquitous cloud storage service for personal media to the same, restrictive scoped storage rules as any other run-of-the-mill app.

While that's a respectable decision coming from the arbiter of the platform, what we'd really like to see here is the ability for end users to select the gallery app they'd like to use by default — plenty of people like the flexibility and ease Photos provides in managing their camera rolls. It shouldn't have to be crippled with permission prompt after permission prompt in Android 11; users should not have to give it up. It might not exactly be a popular move with the phone makers, but unlike in other types of politics, Google has the unilateral power to make gallery apps a selectable default for its own interests and the overall user experience.