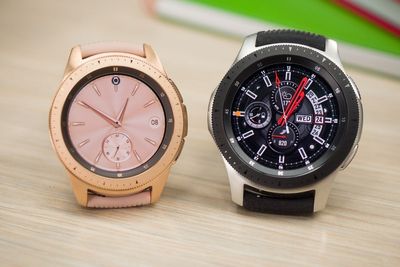 The OG Galaxy Watch in 42 and 46mm sizes

While the somewhat surprising name of the company's next big Apple Watch alternative stopped being a secret a couple of weeks ago, many key specs and features remained under wraps... until earlier today. Obviously, the Samsung Galaxy Watch 3 is not official yet, which means most of the information revealed by SamMobile's usually reliable inside sources over the last few months should still be treated with a healthy dose of skepticism.

Then again, a number of details came to light when the unreleased Android and iOS-compatible wearable device paid the FCC a regulatory visit, and pretty much everything else rings true, mirroring a bunch of features offered by the original Galaxy Watch and/or Watch Active 2.

Exactly like its aforementioned forerunners, the Galaxy Watch 3 has been widely expected for a while now to come in two different case sizes. Well, today we can add the display diagonals and device measurements into the equation to make several important observations you might want to consider before deciding what Samsung smartwatch you should buy later this summer. 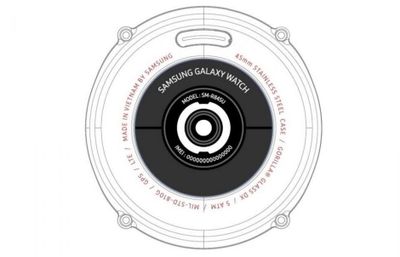 Because we already "know" the Galaxy Watch 3 is set to bring the physical rotating bezel back from the dead, we can safely assume the size of said bezel will be reduced compared to the Galaxy Watch. The Watch Active 2, mind you, replaced this handy hardware component with a software alternative, so naturally, the two main Galaxy Watch 3 variants will be larger overall while retaining the 1.2 and 1.4-inch screen diagonals.

The Galaxy Watch 3 and Watch Active 2 should have a lot in common in terms of battery life too, although there are no words on what processor will be found under the hood of the upcoming Tizen-powered device. This could always improve the energy efficiency of the 247 and 340mAh batteries on the 41 and 45mm Galaxy Watch 3 versions respectively.

These are smaller than what the chunky Galaxy Watch offers, but identical to the cell sizes on the 40 and 44mm Watch Active 2 respectively.

Sensors and other features

If you're starting to get the sense that Samsung is essentially preparing a Galaxy Watch Active 2 with a physical rotating bezel, the rumored health features of the Galaxy Watch 3 will only amplify that feeling.

Yet another top-notch heart rate sensor with 8 pulse-reading photodiodes and support for blood pressure monitoring is coming, alongside built-in ECG functionality. Of course, the biggest novelty could see the ECG monitor actually work out the box, although Samsung may not be able to receive FDA authorization in time for this fast-approaching US release either.

ECG functionality in action on the Galaxy Watch Active 2... in Korea

We have no idea if the company is working on any additional health features for the Galaxy Watch 3, but for what it's worth, the memory and storage counts are expected to jump from 768MB and 4GB respectively to 1 and 8 gigs even on Bluetooth-only variants.

Obviously, the latter flavor is likely to cost a pretty penny, directly rivaling the $799 and up Titanium Apple Watch Series 5 collection, but for the time being, we'd rather not speculate on things like price tags and release schedules. That being said, the Galaxy Watch 3 is rumored to go official at some point in July, which means it could well go on sale by the time the Galaxy Note 20 duo is expected to see daylight.