Samsung just unveiled the Galaxy Watch 3, the company's latest and greatest smartwatch. Now, it's time to see how the newest member of the Galaxy Watch family fares against some of its competitors already on the market.

First, let's begin with the looks! 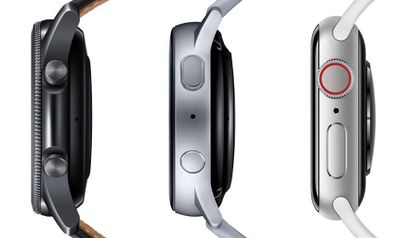 Which of the three smartwatches you'll like best will largely depend on your specific taste, they all have something unique about them. The Galaxy Watch 3 is the one that looks like a conventional watch the most. If you're using a watch face that mimics analog watch arms, you can barely notice it's a digital one from a distance. The rotating bezel is not just for show but actually helps you navigate the user interface better. Overall, the Galaxy Watch 3 has a serious vibe that makes it look like more than just a gadget.

The Apple Watch looks pretty much like any other Apple Watch model with its now-iconic rectangular body. While the shape is more fitting for a display overall, it's less so when you're talking about watches. That's not really a drawback for most people that wear them, they're not exactly looking to replace their classic timepieces. One drawback, however, is that the Apple Watch uses proprietary bands, unlike the Galaxy watches which you can use with any regular watch band that's the right width.

The Galaxy Watch Active 2 looks like a mix between the other two. It has the smooth, curved-edge display of the Apple Watch but the round shape of the Galaxy Watch 3. That combination makes it look a bit too simple. It's great if you're at the gym or running in the park, but wearing it with business attire is a fashion no-no.

Before we see what each of these smartwatches can do, let's take a look at the hardware that's powering them.

Compare phone and tablet specifications of up to three devices. Type a model name in the search field of our phone specs comparison tool or pick a popular device from the ones below. 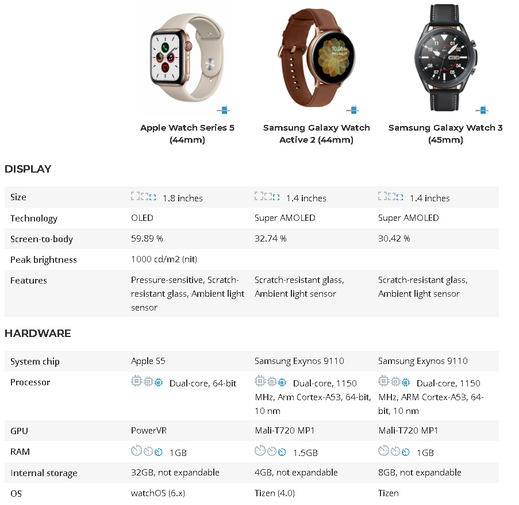 What's notable is that despite being the newer and more premium model, the Galaxy Watch 3 has 0.5GB of RAM less than the Galaxy Active 2. It might sound negligible, but for a smartphone, that's quite a lot. Maybe Samsung realized 1.5GB was overkill.

Another major difference is that the Apple Watch has the smallest battery despite having the biggest body. To compensate for that, however, the Apple Watch can drop the refresh rate of its display to 1Hz, which helps preserve battery when in always-on mode.

Where the Apple Watch trumps the Galaxy pair is storage. With 32GB on board, the Apple Watch Series 5 has 4 times the storage than the brand new Galaxy Watch 3. If you like to keep your workout entertainment on board your smartwatch, you'll find the extra space quite useful.

Comparing every single feature these smartwatches have would take forever, so we're not doing that. Instead, we'll go through some of the major differences between what the Galaxy Watch 3, the Galaxy Watch Active 2 and the Apple Watch can do.

First, both Apple and Samsung have their respective app stores where you can download all sorts of apps to add functionality to your smartwatch. In this category, the Apple Watch takes the cake. WatchOS is much more popular than Samsung's Tizen and many developers choose to only release their apps for the Apple Watch.

This is a good time to mention something that is obvious to some but others might not know. The Apple Watch works only with iPhones, while both the Galaxy Watch 3 and the Galaxy Watch Active 2 can be paired with almost any smartphone, regardless if it's running Android or iOS.

ECG on the Apple Watch Series 5

Until literally yesterday, ECG was a big advantage the Apple Watch had over its Samsung competitors. But not anymore, at least not in the States. Samsung announced that ECG on the Galaxy Watch 3 and the Galaxy Watch Active 2 has been approved by the FDA. Finally, Android users can check their hearts for abnormalities at any time.

This is where only the Galaxy Watch 3 takes a step forward. Although Samsung itself made it clear that the measurements need to be calibrated using a dedicated BP measuring device at least once a month, it's still a feature that's beneficial considering it got FDA approval as well.

Another feature that the Galaxy Watch 3 brings that the other two smartwatches lack. While it's rumored that the Apple Watch does have the required sensors to measure oxygen saturation, the feature hasn't been available to users so far. That might change in the future as it also depends on the FDA's blessing.

Previously a trick up the Apple Watch's sleeve, fall detection is now on the Galaxy Watch 3 as well. Now, Android users can too have the peace of mind that if they fall and hurt themselves, someone will come to the rescue.

Sleep score on the Galaxy Watch 3

Sleep tracking is a feature that's been inexplicably missing from the Apple Watch but on the Galaxy watches it's only getting better and better. With the Galaxy Watch 3, you now get a sleep score after every night and tips on how to improve your sleep quality.

If you're looking for the most comprehensive set of features right now, then the Galaxy Watch 3 seems to be the clear winner. And if you're using an Android phone, then there's no question at all. However, if you're an iPhone user, are these extra capabilities enough to sacrifice the seamless integration your Apple Watch will have with your iPhone and other Apple devices you might have? For most, the answer would be NO. But the Galaxy Watch 3 also has a cool look and you won't encounter other people wearing one 10 times a day.

Keep in mind that the Apple Watch Series 6 is only about two months away and it can quickly erase the advantages of the Galaxy Watch 3.