What’s new in the Galaxy Note 20 and Note 20 Ultra cameras?

Before we get into the details of the features, here’s a quick look at the camera specifications of the all-new Samsung Galaxy Note 20 5G and the Note 20 Ultra 5G.

In August 2019, Samsung announced the super high-resolution 108MP Bright HMX camera sensor. Although the announcement was primarily in partnership with Xiaomi, Samsung also inducted the camera sensor in its own flagship lineup by introducing it on the Galaxy S20 Ultra 5G. It is the first camera sensor on the Galaxy Note series to breach the 100MP mark.

The 108MP camera benefits from a large 1/1.33″ sensor size that captures more light than the 1/1.7″ size of the 64MP Samsung ISOCELL Bright GW1. The 108MP sensor combines four pixels into one by pixel binning and produces 27MP images. The sensor is complemented by an f/1.8 aperture lens that captures a 79° wide field of view, same as the Galaxy S20 Ultra.

On the other hand, the regular Galaxy Note 20 comes with a 12MP camera but, with a similar lens arrangement. On paper, this camera resembles the primary camera on the Galaxy Note 10 and the Note 10+ from last year. 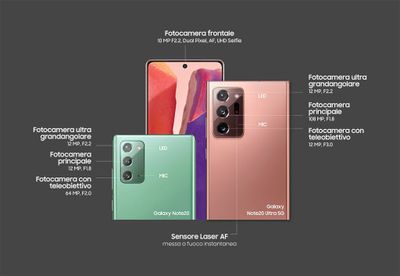 Additionally, both the devices feature a 12MP ultra-wide-angle camera lending a 120° field of view. The 12MP ultra-wide-angle sensors on both the Galaxy Note 20 devices shoot images with a pixel size of 1.4μm and are paired with f/2.2 lenses. This may seem a downgrade from the Galaxy Note 10 series’ 16MP cameras that offer a 123° wide field of view.

Both of the Galaxy Note 20 smartphones also feature telephoto cameras. While the standard Galaxy Note 20 features a 3x hybrid zoom setup, the Ultra sports a periscopic telephoto setup offering 5x optical and up to 50x hybrid zoom, similar to the Galaxy S20 Ultra. Both of the smartphones feature OIS to eliminate shakiness and ensure smoother image capturing at high zoom levels.

Just like the Samsung Galaxy S20 Ultra, the 5X telephoto camera on the Note 20 Ultra facilitates up to 50X hybrid zooming (ie 10x digital zoom on top of the 5X optical zoom). This not only allows users to capture far off objects with higher precision but also allows capturing of celestial bodies including a close-up shot of the moon. Samsung is not vying to achieve the 100x zoom that we found to be “a marketing gimmick” in our Samsung Galaxy Note 20 Ultra 5G review.

Nonetheless, the 50X can be very useful especially if you’re fond of moon-gazing. A special Moon mode on the Galaxy Note 20 Ultra is set to eliminate the requirement of a telescope.

At the same time, the 3x hybrid zoom set up on the regular Galaxy Note 20 utilizes a 64MP camera, which has two advantages. The first advantage is that the 64MP sensor will capture more light, especially at night, as compared to another sensor with a smaller resolution — thanks to pixel binning. The second advantage of this sensor is that you can crop a small portion of the 64MP images to effectively replicate the same results as a telephoto camera with more zoom.

The Samsung Galaxy Note 20 series leverages the processing capabilities of the Snapdragon 865 Plus mobile platform to record videos at up to 8K resolution using the rear cameras. The 8K video recording supports a maximum frame rate of 24fps.

In addition, users can choose the standard 16:9 or switch to a stretched 21:9 aspect ratio for a cinematic appeal. The 24fps recording and the 21:9 aspect ratio are not limited to only 8K and can be chosen to capture videos on all video modes.

The Samsung Galaxy Note 20 Ultra features a Pro Video mode that allows users to actively control parameters such as the ISO, shutter speed, white balance, and change the focal range of the video. What is better is the fact that users can tweak these parameters while recording a video. They will also be able to control the speed of zoom by swiping across the zoom scrubber slowly or quickly.

Although flagships have featured voice zoom for video recording, the Galaxy Note 20 Ultra takes it forward with in-video mic selection. The feature allows users to choose from various audio sources such as omnidirectional audio (ie using rear and front microphones), just rear or just front microphones, or external microphones connected via USB or Bluetooth. At the same time, you also get indicators signaling the gain for the left and right channels while recording. 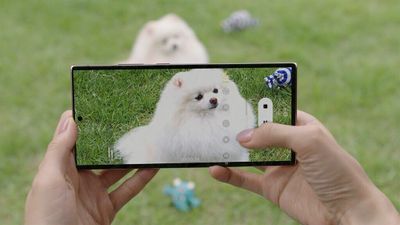 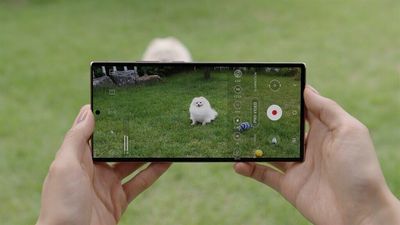 Taking advantage of the 120Hz refresh rate of the Galaxy Note 20 Ultra’s AMOLED display, users can record videos at up to 120fps (at Full HD resolution). In post-processing, the speed of the video playback can be changed as per requirement. This feature, therefore, allows users to create both — slow-motion and timelapse videos from the same clip.

Lastly, users will be able to combine more than one videos to create something called a “Highlight reel.” This Highlight reel feature automatically picks the best parts of all the videos and combines them into a single clip. In addition, users can add different filters to change the mood of the videos.

To sum up the Pro Video features of the Samsung Galaxy Note 20 Ultra 5G, here’s a quick video: