3rd Beta Update is Out

Tips
3rd Beta update is out with few bug fixes and with January Security Patch. So to download and install the update go to Settings and Software Updates. 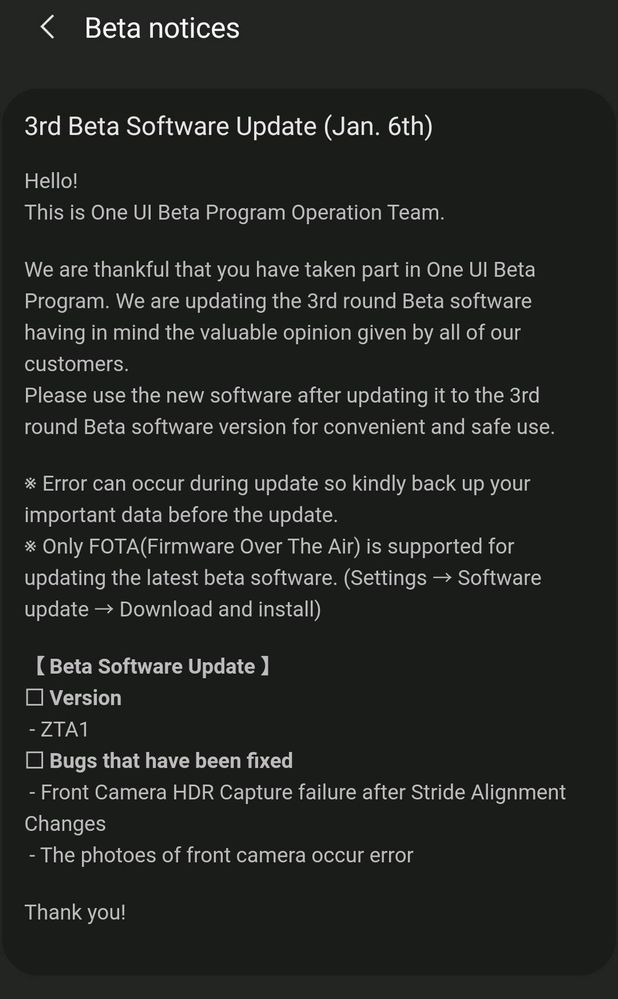 Tips
Just a camera fix? Nothing for slow and unreliable connectivity? No cleanup of Settings? Are notifications still going to leak? Is this the kind of upgrade that cripples the phone to make people think they need a new one?
1 Like
Share
Reply

Tips
how do I download this. I already have beta 1 but OTA still shows me link to A droid Pie
0 Likes
Share
Reply

Tips
Installed beta 3 with no issue. I don't "see" any improvements... yet.

Tips
None of the updates after the first beta have not included any of the bug fixes found by the beta community, suggestions for features or functionality made by the OneUI beta community, or improvements that could be made that were suggested by the OneUI beta community. this is utter bs. I have made several suggestions, reported one or two bugs, and sent feedback through the beta app about the stupid gesture bar colors. this is absolutely unacceptable Samsung and if this continues I will upgrade later this year earlier in the fall since there won't be much left to pay on my device so I will pay the remainder and switch to a different phone that isn't Samsung.
0 Likes
Share
Reply

Thank you for your post. We appreciate your contribution to the Beta community.

Tips
Battery Monitor charts in Device Care looks like it was updated. It's still confusing but no longer obviously broken.
0 Likes
Share
Reply