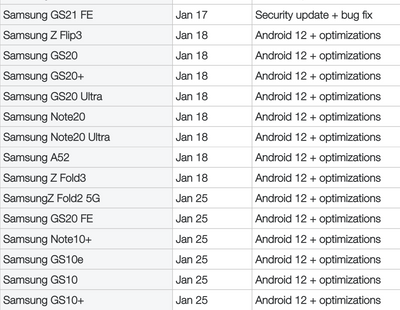 All providers release the updates close to the same time

Galaxy Note
Thanks @Ray2! Hopefully Bell and Rogers have same schedule as Telus.....

Btw, I have a dual SIM device so waiting for Bell (SIM1) and Rogers (SIM2)

I'm currently on Android 10, UI 2.5 since Samsung really screwed up the Dual SIM functionality in Android 11, UI 3.x.....in the past there was always 2 separate buttons SIM1 + SIM2 for Samsung Messages (SMS) app and Samsung Phone (Calls) app (see attached screenshots) ..but then unfortunately Samsung decided to reduce to 1 button only and force users to toggle between SIM1 and SIM2...this resulted several SECURTY issues, PRIVACY issues, COST issues and USER EXPERIENCE issues, which impacted specifically for dual SIM users globally .....while many of the dual sim users (including me) just reverted back to Android 10, UI 2.5 (as a temp solution).....well, for about 2+ years we have been waiting for Samsung to fix this big mistake.....many complaints are reported on several Samsung Community threads in Europe, Asia......but Samsung is not listening and unresponsive, so really hoping this issue is fixed in Android 11, UI 4.

Challenge for Dual SIM users in NA is Samsung Support in Canada and USA are unable to help with this issue.

Galaxy Note
The update for your device depends on the region it was intended for, not on the carriers you are using in Canada.
0 Likes
Share
Reply

Galaxy Note
Yess it will depend on where you purchased the device. Not on canadian carriers.

The telus ,rogers etc schedule only matters if you purchased the device through them.
0 Likes
Share
Reply

Galaxy Note
I attached some screenshots for you.

In the keypad screen, once you start entering a number, a toggle appears at the bottom. One tap to toggle between the 2 SIMs.

In messages, if you start a new chat, the toggle appears right there. If you want to change the SIM in an existing chat, you need 2 taps. One to open the menu, second to change the toggle.

I'm pretty sure you can expect the same for your Note 10+.

Galaxy Note
Im already aware of the need to 'toggle' and this NOT a solution. WRT Dual SIMs, this is the worst mistake made by Samsung and many Dual SIM users globally have been impacted and waiting over 1.5+ years for this major issue to be fixed. This problem has been reported any many Samsung Communities around the world specifically in EU Samsung Community. Not sure if Samsung is listening or has any plans to fix
0 Likes
Share
Reply